Léon Kautz presentation at the Plenary Scientific Session of the American Society of Hematology Meetings in New Orleans. 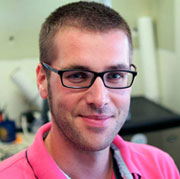 The study describes the discovery and characterization of erythroferrone, the erythroid regulator of iron homeostasis (see abstract). The top six scientific abstracts out of several thousand were selected for this prestigious honor.

The event will be attended by most of the 20,000 physicians and scientists who participate in this meeting. Dr. Kautz also will also receive The Joanne Levy, MD, Memorial Award for Outstanding Achievement, given to the current ASH Scholar with the highest scoring abstract for the ASH annual meeting as determined by the abstract review process.

The Erythroid Factor Erythroferrone
And Its Role In Iron Homeostasis

Introduction:In humans and other mammals, erythroid precursors in the bone marrow are the main consumers of iron. The availability of iron for erythropoiesis is controlled by hepcidin-induced endocytosis and degradation of ferroportin, the iron exporter which delivers iron to plasma from absorptive enterocytes and erythrocyte-recycling macrophages. In humans, within less than a day after hemorrhage or the administration of erythropoietin, duodenal iron absorption is increased by a mechanism which presumably evolved to provide for the iron requirement of increased erythropoiesis. Increased iron availability appears to be mediated by the suppression of the hormone hepcidin, thereby increasing ferroportin and delivering more iron to plasma.

We identified less than a dozen erythroid-specific transcripts that change prior to the suppression of hepcidin mRNA. Searching for secreted proteins, we focused on a previously unidentified transcript that is highly induced prior to hepcidin suppression, and provisionally named it “erythroferrone” (Erfe). Erfe mRNA expression was greatly increased in the bone marrow and the spleen 4h after phlebotomy or EPO stimulation, preceding hepcidin suppression. Erfe-deficient mice did not suppress hepcidin mRNA after phlebotomy (Figure) or EPO injection and recovered more slowly from phlebotomy-induced anemia than their wild-type counterparts.

We did not observe any significant defects in their baseline erythropoiesis or the composition or maturation of erythroid precursors suggesting that Erfe exerts its effect specifically on hepcidin for the regulation of iron availability. Hepcidin expression was reduced by injection of recombinant Erfe (2 μg/g) in wild-type mice.

Moreover, treatment of mouse primary hepatocytes with supernatants of HEK293T cells overexpressing Erfe led to a significant decrease in hepcidin expression suggesting that Erfe can act directly on the liver to suppress hepcidin. Importantly, we also found that Erfe mRNA is greatly increased in the marrow and spleen of the mouse model of β-thalassemia Hbbth3/+ compared to wild-type controls. 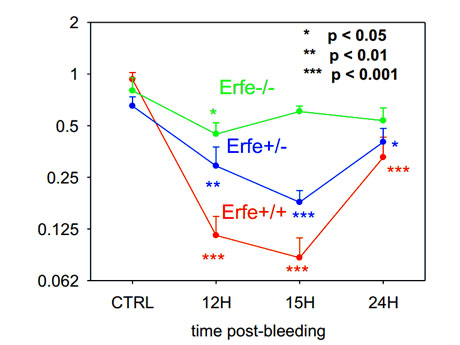 Conclusion: Erythroferrone may be the long-sought erythroid factor repressing hepcidin during increased erythropoietic activity, and may contribute to the pathogenesis of iron-loading anemias including β-thalassemia.

There is strong medical evidence of a potential for significant organ damage when iron stores cause serum ferritin levels above 1,000 µg/L. However some people seem to experience symptoms with levels between 300 and 1,000 µg/L. Higher levels are more likely to be associated with more severe symptoms.